There’s nothing extraordinary about why Hillel Kravetsky started volunteering. When he heard about a need in his community, he simply decided to help.

Kravetsky is a volunteer at Chesed Shel Emes, a non-profit funeral society that prepares members of Winnipeg’s Jewish community for burial according to tradition. He joined the organization in 1985, and since then has been involved with the preparation of just about every deceased male that has entered its facilities.

“It’s special, it’s meaningful and it’s very personal to do this kind of work,” says the 66-year-old Tuxedo resident. “You’re the last one to have any contact with these people.”

Hillel Kravetsky is honoured to volunteer at the non-profit funeral society Chesed Shel Emes. (Ruth Bonnebville / WInnipeg Free Press)
The name of the funeral home comes from a Hebrew phrase that refers to the act of taking care of the deceased, which translates as “true loving kindness.” Kravetsky calls preparing a body “the ultimate mitzvah” (good deed), because it’s something you do for someone that they can’t repay you for.

“In the Jewish tradition, being someone that actually does the preparation is considered the highest honour,” says Kravetsky, who was involved with the body preparation for his father and older brother when they died within six months of each other in the mid-90s. “It’s a very emotional thing and it doesn’t lose its meaning.” 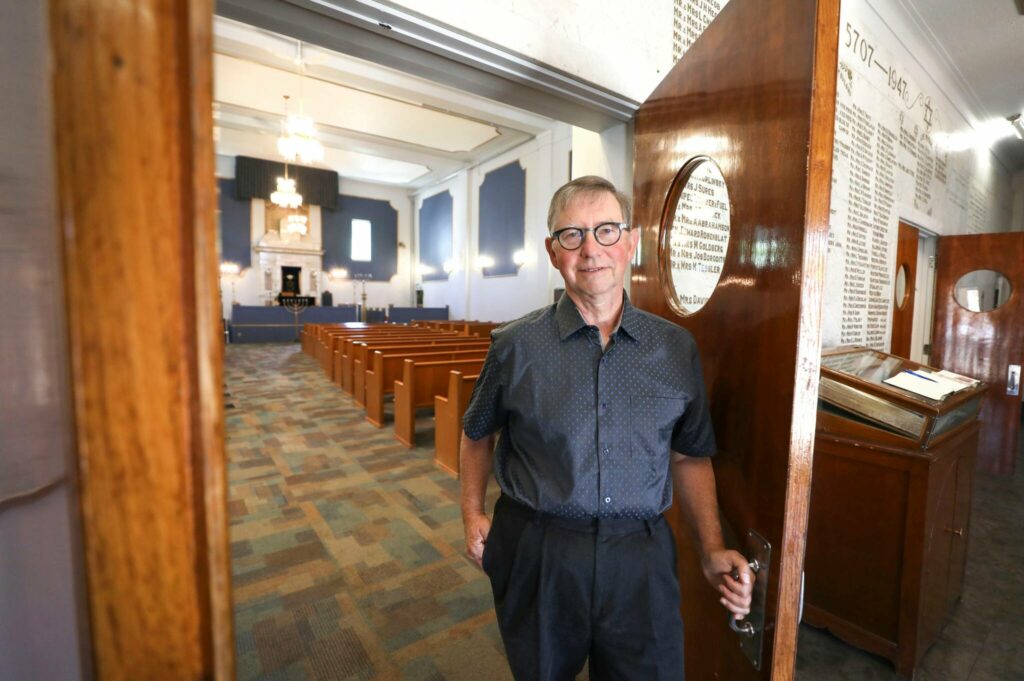 Working in teams of three, trained volunteers carry out the ritual cleansing, known as tahara. They wash the deceased for cleanliness and spiritual purification. They dry and dress the body in a three-piece cotton shroud sewn by local volunteers, all while offering blessings and prayers.

Founded in 1930, the Chesed Shel Emes facility originally comprised two buildings located next to each other at 1023 Main St.: a chapel that was built in 1947, and an attached structure that was built as a private home in 1905 and used for office space and body preparation.

In addition to preparing bodies for burial, Kravetsky joined the organization’s board of directors shortly after first getting involved. Since then, the retired businessman has chaired numerous committees and served five non-consecutive terms as president.

One of Kravetsky’s proudest moments as a board member was seeing the Jewish community come together a few years ago to raise the $3.25 million needed to replace the 1905 building with a two-storey, state-of-the-art facility that features a larger preparation room, more storage space and accessible entrances.

“His contributions impact every aspect of our operation,” she says. “His leadership has provided the stability and vision to enable us to expand and enhance our sacred mission.”

Mentoring new volunteers and succession planning are important to Kravetsky because it ensures the ongoing health of Chesed Shel Emes.

“We have to be prepared to continue this important obligation to the deceased for as long as time is,” he says. “I (joined in 1985) because there weren’t enough people, and I wanted that to not be the case in the future. That’s why I’ve continued with this organization: to ensure its success in the future.”

If you know a special volunteer, please contact aaron.epp@gmail.com