Zoltán Jakal gave back through tahara 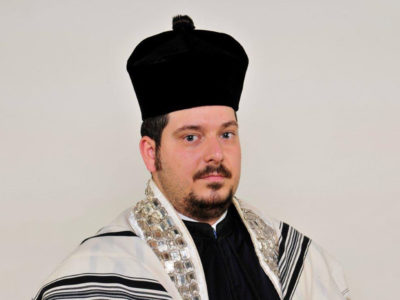 As you read this, Zoltán Jakal is guiding planes at the airport in Churchill, Manitoba. He recently moved north after three years in Winnipeg—a time during which he performed about 50 taharas at Chesed Shel Emes.

Tahara is the ritual cleaning and dressing of a Jewish body in preparation for burial.

“Winnipeg’s Jewish community gave me the chance to restart my life in Canada and I wanted to find a way to give back,” says Jakal, who reached out to Chesed Shel Emes shortly after arriving in 2016. “Doing tahara makes me happy. It’s an expression of love.”

Jakal, who is also a trained cantor, didn’t even discover he was Jewish until he was 16. He grew up in communist Hungary with a Jewish mother and a Catholic father. No one ever spoke of religion.

At 16, Jakal went to Israel with his school choir. Before he left, his mother handed him her father’s kippah and told him to wear it if he goes to holy places. His Jewish connection came alive as he visited the Diaspora Museum, the Kotel, Masada, and other places. “I suddenly realized what nation I belonged to,” he says.

What followed was a series of jobs, some career indecision, choral singing, and a return to Israel to perform opera. He met Miriam, a woman who made aliyah from Russia in 1992. He returned to Hungary, but the two stayed in touch and realized they were meant to be together. Jakal had his bris in Hungary (at the age of 27), learned more about Judaism, and made aliyah. He and Miriam lived in Israel for two years before returning to Hungary. Jakal joined a cantorial choir and fell in love with Jewish liturgy.

After Hungary, Miriam, Zoltán, and their two young girls came to Winnipeg where Miriam had a childhood friend.

Jakal worked at Chabad, WestJet, and Manitoba Justice before being accepted into the air traffic control program. His first posting in Churchill will last a minimum of two years. He says he will remember his work at Chesed Shel Emes fondly.

“I like that the people served by tahara can’t ever thank me,” says Jakal.

While the deceased cannot thank Zoltán Jakal, the community can. Thank you, Zoltán, and good luck!