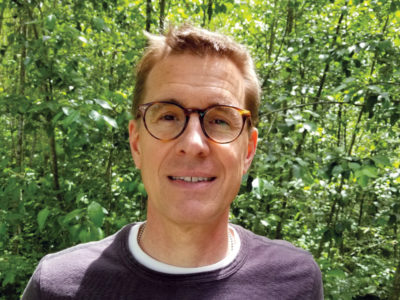 Ian Corne: “It’s a way to connect and remember a very dear friend.”

On Ian Corne’s night table there rests a book of Tehillim (Psalms). His bookmark is a photo of him and Howie Goldberg, a childhood friend from Winnipeg who passed away at the age of 26 just over a quarter-century ago.

“I read some Psalms every year on Howie’s yahrtzeit,” says Corne, a mining company official in Abbotsford, British Columbia. “It’s a way to connect and remember a very dear friend.”

Corne first recited Psalms while serving as a “shomer” for Goldberg. A shomer is a guard who sits with the deceased from the time they come into the care of Chesed Shel Emes until the funeral. While the Chesed Shel Emes provides a shomer, family and friends—like Corne—are invited to share the responsibility. It is an ancient Jewish practice designed to protect body and soul.

“It was a powerful experience for me as a Jew and as Howie’s friend,” says Corne, 53. “It was an act of devotion and an important way to be closer to his energy. It was also a time of quiet reflection and coming to terms with the loss.”

In 2018, Corne once again lost a Winnipeg friend—Bryan Hershfield. Again, Corne sat vigil at Chesed Shel Emes for a few hours to honour a close friend who was taken far too soon. As shiva ended, he went for a walk with Hershfield’s brother. On the walk, Corne’s phone rang. It was his sister calling to tell him that their Uncle Alvin Corne had just passed away. Corne cancelled his flight back to B.C. and, again, served as a shomer, this time for a beloved uncle. A shomer twice in a week. Each time, he says, it was a remarkable and important experience made easier by the gracious and welcoming staff and volunteers of Chesed Shel Emes.

“I encourage people to think about being a shomer (or shomeret) when a friend or relative passes away,” says Corne. “It is a beautiful, loving experience, and a temporary escape from the chaos of funeral planning and getting ready for shiva. It’s a chance to connect in a very deep way.”